How quick and easy it is to open the wall panel with the gas struts I added. They support 150 pounds each, so I don't even need the props but still use them so the struts will last a long time.

Looking back at the blog it was two years ago that I started the base. It was fun building and more fun to hang out in for the past year and something. We keep camping overnight, I have done a two night stay at least once. Wish I'd made hash marks for each night camped, I have no idea how many times now.

Observations:
I would not change much of anything on my build. It suits my place and needs very well. A solid foundation is crucial to any building large or small, my piers have done well but some settling occurred and while I've shimmed and jacked a little bit it seems the span under the door sags so it sticks a bit. I really need to get more support in that area.

The pallets. As a sub floor I think they are working very well. I'd use them again on a similar project (and have!) even the ones that stay exposed outside are holding up well. I never even coated them for weather proofing since screws where used I can replace them with similar sized pallets anytime. I wish I'd used better pallets there, the middle one kind of has a gap to it that is problematic.

Someday the pallets will weaken due to exposure, when that comes I will probably fill in those three feet with a regular deck.

The ugliest part is where water drips under the panel that lifts. Could a better design keep more moisture away? Could I use a different material for that bit of the floor? So far the outdoor rated plywood is holding up fine but discolored. I can trim the last few stained inches out with a circular saw and replace it with a composite so water and weather will never be a problem.

The best afterthought I've had is the rubber I used to seal the flexing area between the fixed roof and the panel that raises. All I could find suitable in hardware stores was a rubber shelf liner. That holds up well but a better plan would be some conveyor belt material from an industrial supply house. Even used conveyor belt would probably hold up for years in this situation. Being heavier I think would lend to it sealing better than this flimsy liner and the belt comes in long rolls. It was tough finding the liner I used in one piece because I didn't want seems.

Well two years in - who knows how what will happen in the next two years.

Before I sign off I must give a shout out to Joe Everson and Deek again! And everyone in the builder, creative community.

I think expanding the dimensions was better, at least for me. The cost was marginally more. I wouldn't dig climbing and sleeping in the loft like Deek did. Hammock is more my style and by having the extra distance between the walls that worked just right. I dropped the sky light idea early on and don't regret it. Maybe in some humid area it would be useful but it adds a lot of complexity to building and many saw strokes to materials. Also by going wider it made the loft taller. For me it means extra storage, we keep an inflatable mattress there but I still prefer the hammock.

I hope others build and share their thoughts. I have one friend who is now planning to do an A-Frame at his place.

Email ThisBlogThis!Share to TwitterShare to FacebookShare to Pinterest
Labels: anniversary

For storing things I've installed several hooks under the framing and a couple of screws in the wall that work well for light items such as a broom. When I show up with a duffel bag for overnight something a bit sturdier would be better so I picked up a big fat dowel and a paddle bit.

She says we need a table because cooking breakfast on the deck isn't working to well, so I set out for a plan that won't take up much space and I came up with a fold down table. Simply putting a hinge against the wall was easy but then how to prop it up? Folding legs could collapse and leave breakfast on the floor or worse. Someone suggested a rope or chain and that seemed like the best fit for my situation here. Just unhook it and the chain hangs out of the way. Possibly the chains could be used for something else when the table isn't needed. 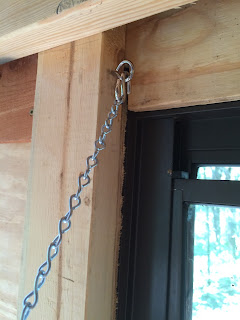 Now what can I do for flooring that won't break the bank?
Posted by KJ at 22:56 No comments: